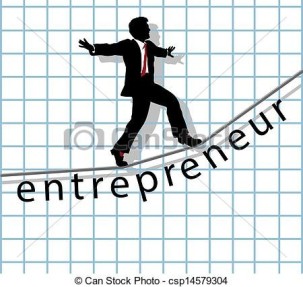 Most of the entrepreneurs I am advising at the moment fall into three distinct buckets:

The Go-Getter recognizes excellence. Their passion drives their actions – yet they realize that going it totally alone will slow them down. This type of entrepreneur seeks out professional advice – and more importantly – evaluates it, considers it, then accepts the parts that work for them. They hire experts; they seek mentors. They do not yield to naysayers, yet they are willing to modify their vision to meet market need. They know that success relies on their own actions – and they concentrate on their areas of strength to drive their business. Go-Getters make great clients.

The Pragmatic Inventor has a product he/she created or refined. Inventors think outside the box. They see a problem, and find a fix. What these clients need is business and marketing help. They need a team to take their invention or idea and make it a desirable commodity. Some need help in packaging, costing, placement and sales. Some hope to license their raw invention, receive royalties and move to the next idea. Again, those destined to become successful recognize their strengths and understand their limitations. They know it takes a team to win. Inventors take more work, yet are very satisfying clients to see and help succeed.

The Controller may be a driven salesperson or a quirky inventor – or a mix of both. They often believe in themselves or their product so much that they cannot accept that success means letting go — or at least loosening their grip. These clients need a mix of TLC and tough love on their journey to accepting advice and realizing that few one-person shows hit the big time. They may seek advice, acknowledge the wisdom of others – but question having to pay for public relations and marketing advice. Controlling clients present significant challenges and often take more time and energy to help.  And, in my experience, they are most likely to stall or fail. When they finally accept that they need help … and that expertise comes at a price … the relationship can work.

Whatever the style, entrepreneurs intrigue and inspire me — I learn something new from every one.

What type of client challenges you the most? What are your best tactics for dealing with them?

OK … I recently posted about an absolutely horrible experience with Hotels.com. Here’s the back story.

In booking an upcoming trip, I searched various websites for accommodations. I made tentative reservations via Hotels.com, carefully clicking on the “pay at checkout” option.   BUT I missed a pre-checked box at the bottom of the page. My card was charged instantly … which, I missed since I had never seen such a thing.

Hotels.com also adds a tiny, and misleading disclaimer at the very bottom of the page (the THIRD screen down) that says cancel before you get there (three days in advance) or risk paying a penalty.  OK. Seemed reasonable. My trip is still two months away. Even further down the page a complexly-worded note that says any change is subject to a penalty fee.

What? I’ve booked through Hotels.com for years. Never had this problem before. My plans changed. I needed to change the reservation. So I called.

The recording says to make changes online. Do Not Do This. I did, and was charged $200.  WHAT? The Hotels.com rep basically said tough luck. The supervisor definitely said so sad, too bad, we’re keeping your money, you have no option. Further they said it was all the fault of the hotel I booked with. That it was the hotel’s policy to charge $200 for any change to a reservation.

I called the actual hotel again, got the name of the manager, who offered to help in any way he could … and called Hotels.com once again.

Getting the picture? Frustration? Disbelief?  I again spoke with the rep … who this time said they could see all the notes from previous calls — including from the credit card company. I gave her the name of the manager and the assistant manager at the hotel in question.   Finally, this person appears to have reversed the charges.

How many calls? How many hours? I’ve lost count.  I am waiting for my credit card company to confirm that all charges have indeed been reversed.  Does it matter that not ONE Hotels.com person I spoke with was a native English speaker. Were they in India? Just poorly paid immigrants?  Bottom line: Hotels.com has horrible customer service.

So … Let the Buyer Beware … use Hotels.com  (and probably Expedia.com) at your own financial risk.

I found this quote … which goes back to motivation:

“If you really want something, you can figure out how to make it happen”  — Cher

This is true for both positive and negative people …

A person in my life struggles with mild physical and psychological issues, yet this person usually figures out a way to be taken care of. If straightforward, conventional means don’t produce results, the next effort is manipulation.  This ranges from leaving out parts of a story to outright fabrication. I have learned to not take statements at face value — they rarely tell the whole story. Out of respect for a shared history, I stay in contact with this person, but I now limit contact and keep conversations light. That was a tough, but necessary choice. People have the right to live as they choose — and you (or I) cannot rescue them.

Yet I still believe when honest effort, and honorable intentions, blend then good things happen. Motivation intertwines with innovation. Just move the self-imposed roadblocks — and amazing changes will happen. Good to remember … for business and life!